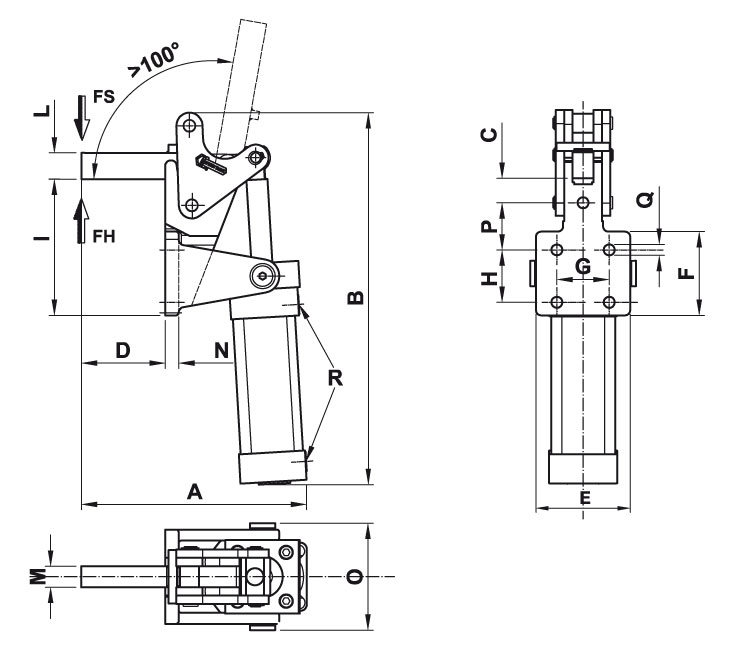 Features and applications
The pneumatic series can offer increased productivity with a safe and automatic operation by combining the design of the hand-operated tools and the power of air pressure. Apart from the high load capacity there are several advantages of pneumatic toggle clamps:
- Constant clamping force (FS) - independent of the operation
- Possibility of the operation of several devices at the same time
- Possibility of the activation from various points - remote control could be performed by machines.
- Different versions are available with magnetic cylinders that allow contactless positioning control to obtain electrical command pulses in particular tightening situations.

The clamp remain closed even in the case of loss of air pressure.

Recommendations
We recommend using a filter-reducer-lubricator group for a long and smooth operation of the cylinder, while for a long duration of the mechanical components we recommend using suitable flow regulators and calibrating the speed of the motions desired, starting from a low speed and gradually increasing this speed.
A special grease is placed between two contacting surfaces during assembly.

Material: Base made of spheroidal cast iron; Lever in galvanized steel; Hardened and ground pivots.

Model 2S.AAU470 is the suggested proximity switch for detecting the position - to be ordered separately. (see Accessories)

This procedure allows you to request a quote for the product . Quantity to request in the quote

* The n. of pieces in a pack are indicated on the product page, if not indicated reference is made to n.1 piece