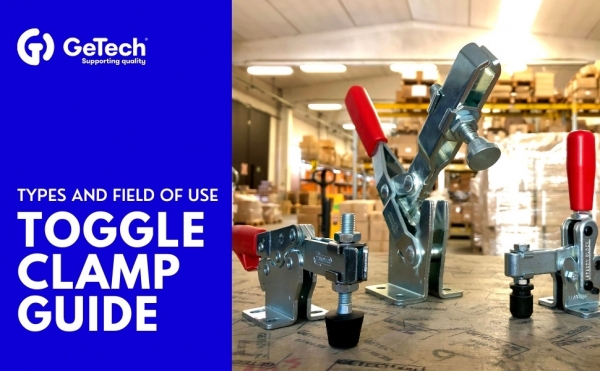 Toggle Clamp Guide - Types and Fields of Use

Toggle clamps are an essential tool in the industrial field. Their main purpose is to keep the workpiece in place, guaranteeing you a safe and accurate work. In addition to this, toggle clamps are effortless to use: in fact, thanks to their design, these tools convert a low input force into an extremely high clamping force, keeping the operator safe while loading, working and unloading the workpiece. These highly resistant tools are designed for repetitive movements which makes them suitable for most of the industrial applications. As toggle clamps come in many shapes and sizes sometimes it could get a bit confusing to understand which type fits your needs the best. For this reason we would like to give you a little help by describing the main features of the toggle clamp types we offer in our store.

Vertical toggle clamps
In case of vertical toggle clamps even a lower power input results in a high clamping force. Thanks to this, vertical toggle clamps are not just used to close moulds but have one of the most versatile applications in the industrial field. When the tool is in closed position, the control lever is in vertical position. The clamp has a big and clear opening, like this the insert, change and remove of the working piece is unproblematic. The clamps of the vertical series are built to be easily disassembled for reworking of the individual elements depending on the requirements of use.

Long life toggle clamps
Long life toggle clamps are perfect for extremely heavy loads. Thanks to the strong structure of the clamps, the long life series is usually used in areas where repetitive movements and high clamping forces are needed. The clamping and control levers are forged guaranteeing an extra resistance.

Rotational toggle clamps
The toggle clamps from the rotational series are designed mainly for the field of rotational plastic moulding. The clamps of this series have been developed based on the suggested modifications of the professionals from the plastic moulding field. The rotational toggle clamps are designed to clamp and open in a safe and quick way even at high temperatures (240 - 300°C). These tools - compared to the basic lines - have modified geometries, have been forged with different tolerances and got different finishes in order to adapt to the requirements of this special field.

The clamps from the pneumatic line remain closed even in the case of loss of air pressure.

As a conclusion, we can easily state that choosing the right toggle clamp will definitely make your life easier. The wide range of toggle clamps that we offer are well known for their high quality and reliability, which becomes essential in terms of the efficiency of your work. See our full range here.

If you would still need any help, please do not hesitate to get in touch with us. We will be more than glad to assist you!

Tagged under
Back to Top